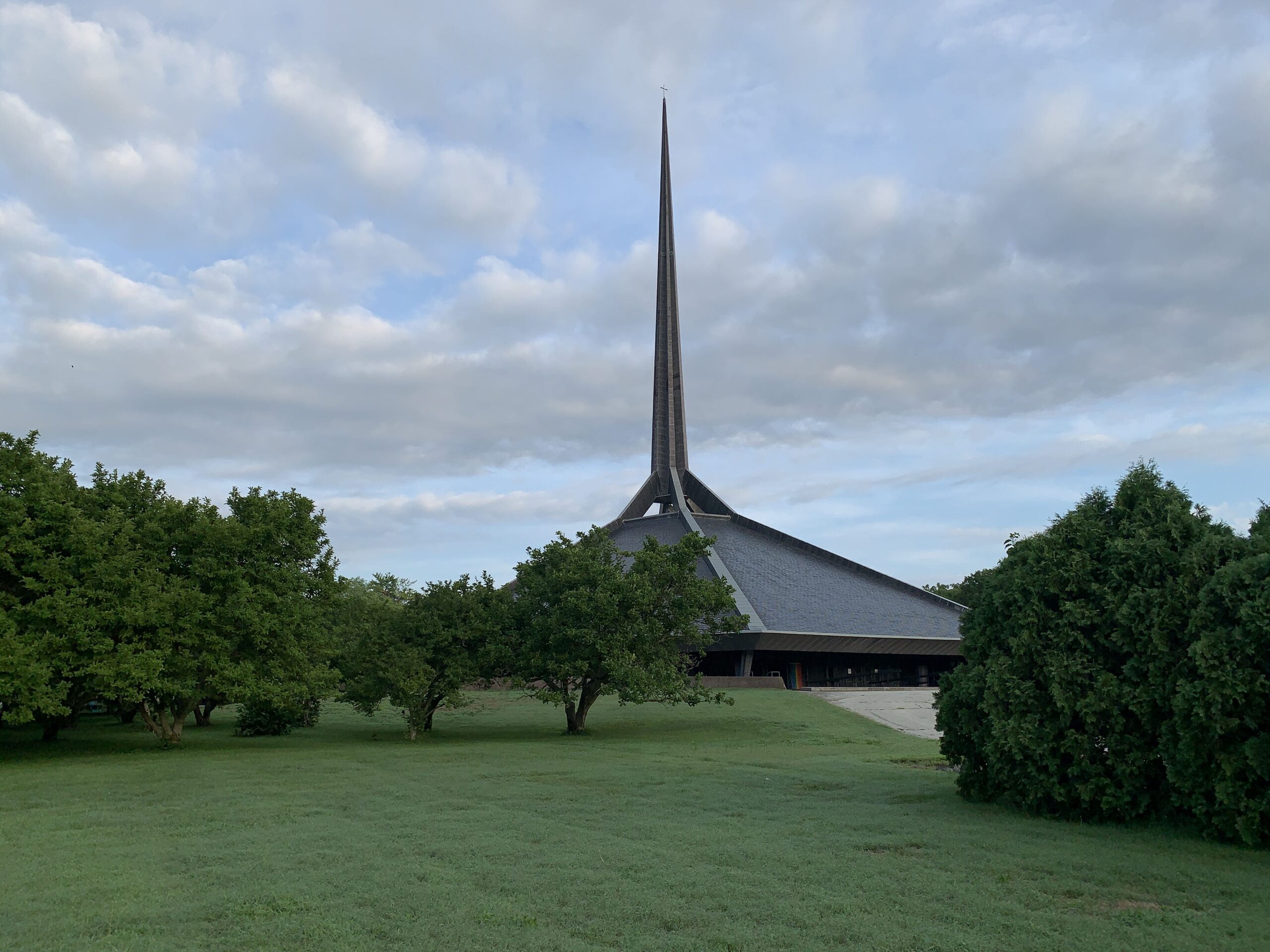 On September 25, 1955, forty-three persons banded together in Christian love to organize North Christian Church. Worship services were held at St. Paul’s Episcopal Church from October 1955 until February 1956, when the Caldwell mansion on 25th Street was purchased and converted to a house of worship. In 1958, the church purchased land on Tipton Lane for the construction of a new building. In November, 1958, an Architectural Committee was formed, and they selected Eero Saarinen as the architect in February, 1959.
​
On September 2, 1962 and the congregation held a groundbreaking ceremony. The first worship service in the new church took place on March 8, 1964. Six weeks later on April 19th, the new building was dedicated. The Holtkamp organ was dedicated the following Sunday.

Born to world famous parents, architect and Cranbrook Academy of Art director Eliel Saarinen and textile artist Loja Saarinen, Eero Saarinen was surrounded by design his whole life. It came as no surprise that Eero was helping his father design furniture and fixtures for the Cranbrook campus by the time he was in his teens. In 1929, Eero left for Paris where he studied sculpture before enrolling in the Yale architecture program the following year. In 1934, he returned to the State of Michigan to teach at Cranbrook, work on furniture designs, and practice architecture with his father.

After working with his father on many projects, Eero Saarinen had a chance to express his philosophy when he entered the 1947 architectural competition for Jefferson National Expansion Memorial. That was his first opportunity to establish himself as an independent architect, and he set out to design a monument not only to Thomas Jefferson and the nation but also to the modern age. For him, “The primary concern was to create a monument that would have lasting significance and would be a landmark of our time. Neither an obelisk nor a rectangular box nor a dome seemed right on this site or for this purpose. But here, at the edge of the Mississippi River, a great arch did seem right.”

The Arch was Saarinen’s first great triumph, but there would be many more. Projects, such as the General Motors Technical Center near Detroit, the TWA Terminal in New York City, and the Dulles International Airport near Washington, D.C. brought him acclaim. He became one of the most accomplished and creative architects of his time.
​ 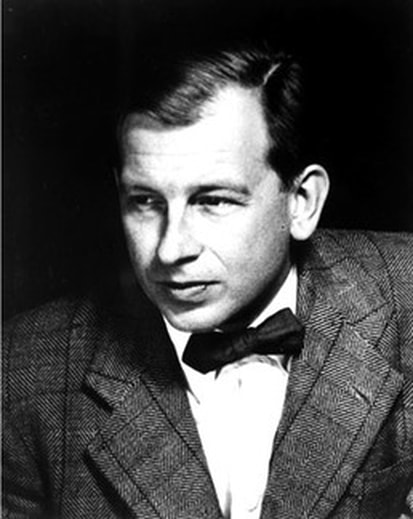 In “Eero Saarinen on His Work” edited by Aline Saarinen, and published by the Yale University Press in 1962, Saarinen writes about designing North Christian Church:

“Let me explain a little of my thinking about the problem of designing a new church for the Disciples of Christ in Columbus. I think we have to face first some of the problems of what has been happening in America today with the church and religion and architecture.

In the 11th and 12th centuries, there was the cathedral and it was the significant thing. Maybe it had a cloister or a priory or some little low building off to the side, but the cathedral building itself dominated everything. Today, there are Sunday school rooms and good-fellowship rooms and kitchens and gymnasiums and square dancing rooms and so forth. All these have tended to sprout into separate buildings and to get bigger and bigger and more and more important and finally, the church itself has become an insignificant, and almost forgotten little thing.

So, in this church, I would like to put all that activity downstairs. Maybe underground, hidden away and put only the sanctuary above ground and make it the significant visual and architectural thing.

So I think this sanctuary should be elevated and make you climb into it. There is another reason why this church must be elevated and that is the site. It is a flat site in a residential district. The church must be elevated so that it stands proudly above the parked cars and surrounding little ranch-type houses and can be seen.
After the approach, there is the act of entering. There should be awareness of a changing environment, like a decrompression chamber from the outside world into the church. Maybe you would go down and up again into the sanctuary. The light, of course, would begin to change, too.

I guess another reason people go actively to church is so they can worship with a group of people of like mind. They will do this in the sanctuary and they should feel they are all in unity and harmony in a special and appropriate spiritual atmosphere. As I understand the Disciples of Christ, communion is a very important act and the congregation participates in it. The communion table should be the focal point. We can have the congregation sitting around the communion table where everyone feels equal and joined together.

Whatever way we solve that, the congregation should have a positive feeling of being within the church, in a special, enclosed spiritual world. I see it as a very simple interior with organ pipes an important element in the sanctuary design. The primary element to create the right spiritual atmosphere would, of course, be light. That is the crucial thing.
​
On this site, with this kind of central plan, I think I would like to make the church really all one form: all the tower. There would be the gradual building up of the sheltering, hovering planes becoming the spire. The spire would not be put on a box or come up from the sides of the roof, as we did at Stephens College. The whole thing, all the planes, would grow up organically into the spire.

It would be good as an exterior form, because the spire is a marvelous symbol of reaching upward to God and because it would proclaim this as a church in the silhouette of Columbus. It would also work well as an interior space. It would give a feeling of soaring space and a feeling of special enclosure. It would work well for the light. The primary light source would be an oculus in the spire. It could give intense light on the communion table. This light would lead you as you saw it from the narthex. It would also keep you from being distracted by the people across from you, but you would be aware of them. Then there could be a feeling of contracting light back in the seating area. And this spire form would work well structurally. The structure could be very simple and would clearly and logically express the form and character of the church.” 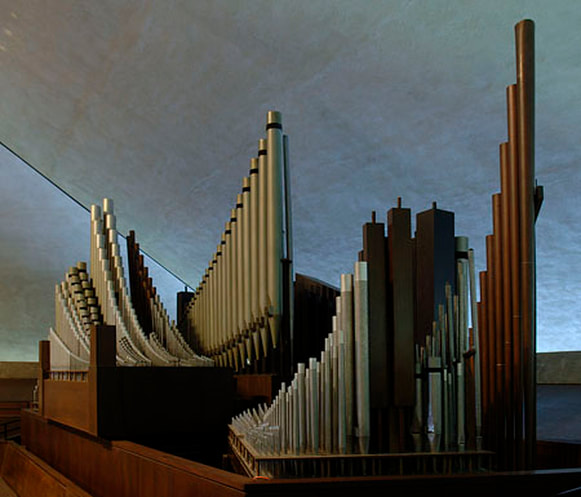 North Christian’s pipe organ is one of the very last instruments designed by Walter Holtkamp Sr. before his death. His son, Walter Jr., completed the project and installed the organ in 1964. During the design phase of NCC Saarinen himself suggested Holtkamp to build the organ:
​
“In the North Christian Church, my thinking has always been to make the organ pipes an important element in the sanctuary design. I think, therefore, we must have an organ builder who understands the visual potential of his instruments, and on this basis I would like to recommend Walter Holtkamp.” (Eero Saarinen, letter to J. Irwin Miller, March 22, 1961)